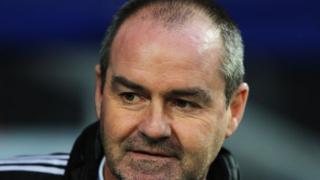 Steve Clarke says it has been a "fantastic year" for West Bromwich Albion despite the 2-0 defeat away to Manchester United.

The Baggies manager believes his side could have earned a point from Old Trafford and suggests at one stage that the game was "likely to end 1-1 rather than 2-0".

Clarke says he has tried to build on the strengths that he inherited from Roy Hodgson and believes "up until now, we have had a good season."