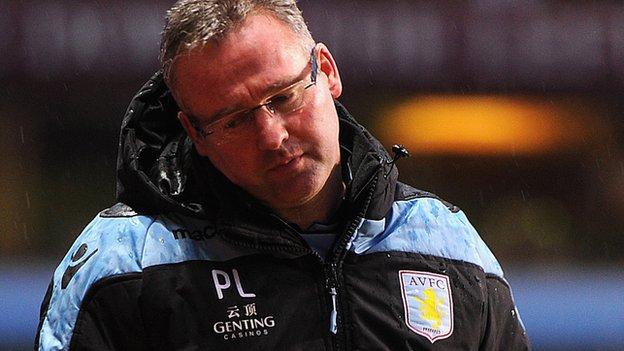 Manager Paul Lambert insists Aston Villa will avoid relegation from the Premier League this season despite a disastrous Christmas campaign.

But Lambert said: "Everyone was positive after the Liverpool win but there is now a negativity after these three defeats.

"It's so frustrating to see one of my old clubs deteriorating. They have conceded 15 goals in three games. It is disgusting. The players should be embarrassed - I would be totally embarrassed if I was part of a team conceding so many goals. You have to take responsibility as a manager, because you ask them to go out and play a certain way with effort and desire, and they have just not done it. They have not done what he's asked."

"I understand that feeling but I have a belief that Aston Villa will be fine."

After an 8-0 defeat at Chelsea and a 4-0 home loss to Tottenham, Villa were beaten 3-0 at Villa Park by fellow strugglers Wigan.

"The last three results have certainly hurt us," said Lambert, whose side are one point above the drop zone.

"We've got a lot of injuries at the minute which certainly doesn't help, but we know we're in a fight.

"There are only two ways you can go: run with it and get going or roll over. We're going to keep fighting."

Some disgruntled Villa fans left the ground when Wigan scored their third goal on 56 minutes.

"The fans have gone away as hurt as we are. We have to stick together.

"I've been beaten up badly both as a player and as a manager. It happens. It was disappointing to lose to Wigan as it was an opportunity to climb the table."

Lambert's starting line-up against Wigan had an average age of 23, but the home side, missing experienced players such as captain Ron Vlaar, Richard Dunne, Gabby Agbonlahor, Darren Bent and Charles N'Zogbia, made the worst possible start when unmarked Wigan defender Ivan Ramis scored after three minutes.

Second-half goals in quick succession from Emmerson Boyce and Arouna Kone sealed a comfortable win for Roberto Martinez's side, who climbed out of the relegation zone and above Villa.

Lambert's team face a trip to Swansea on New Year's Day, followed by a FA Cup clash at home to Ipswich on 5 January.

They then play the first leg of their League Cup semi-final against League Two side Bradford City at Valley Parade on 8 January.