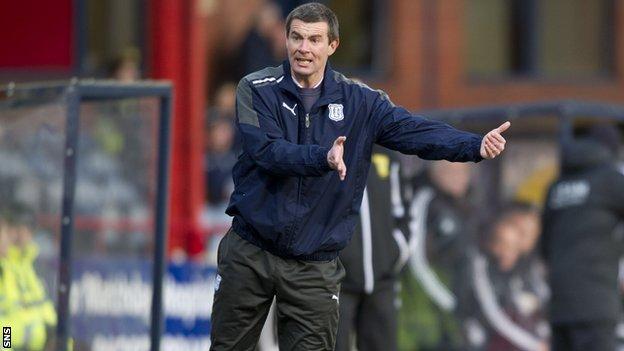 His team lost 3-1 to Aberdeen on Saturday and have won only three out of 20 league games.

"It's great that the club's in the SPL - it's where the club wants to be," Smith told BBC Scotland.

"But is it a year too early? Probably, but we wouldn't have knocked it back because it's great chance for the club to be here."

A late goal from Mark Stewart only turned out to be a consolation as the prolific Niall McGinn bagged a hat-trick for the Dons.

"It's as poor a performance as we've had here over the season," said Smith.

"We knew if we went about our business as we normally do we'd be right in the game.

"But that got knocked out us two minutes into the second half when we conceded a silly goal from midfielders taking too many touches and putting each other in bother.

"They're experienced players who should know better."

Despite the difficult season so far, Smith is aiming to make a better start to 2013, beginning with a Tayside derby at St Johnstone on Wednesday.

"It's been a very steep learning curve for myself from getting thrown in to where we are in the SPL now," he said.

"But you wouldn't change it.

"We've still got that belief and spirit in the dressing room that we can change things round in the year coming.

"The Dundee support's been great with us. I would just continue to ask them to keep behind us and stick with us."