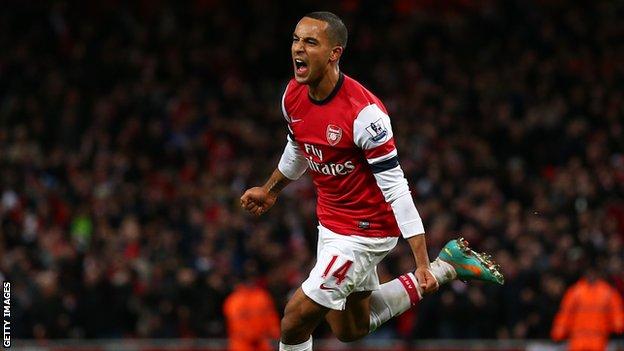 Arsene Wenger says Theo Walcott's hat-trick in the 7-3 win over Newcastle United will not decide whether he stays or leaves Arsenal.

Walcott's contract expires at the end of the season and is free to speak to other clubs from next week.

But Wenger said: "My desire is to extend his contract. He belongs here and hopefully we can do it.

"Should he have had a disastrous game today, it would not have altered my determination to extend his contract."

Theo Walcott, who has scored 10 goals in his last 10 appearances for Arsenal in all competitions, has scored with 35.8% of his shots this season in the Premier League - the best ratio of any player to have scored five or more goals

However, the England international could sign a pre-contract agreement with a foreign club from 1 January or join a Premier League side for free in the summer.

Liverpool, Chelsea, Manchester City and Manchester United are all believed to be interested in the player.

Speaking after the Newcastle game, Walcott, 23, said talks were "ongoing" with Arsenal, adding: "I'm sure something will be sorted soon."

He also said he hoped he could cement a regular starting place as a central striker after being switched from his position on the wing.

"Hopefully I've opened a few eyes," he said. "It's just a different option."

Walcott has scored 14 goals in all competitions this season and four in three games since being deployed as a striker.

"Today just typifies what I think he can do through the middle," Wenger said. "The first goal was a Thierry Henry-type goal and he showed great determination with the third.

Wenger said Walcott "loves" Arsenal, adding: "I would like to talk more about his footballing qualities than about money and speculation."