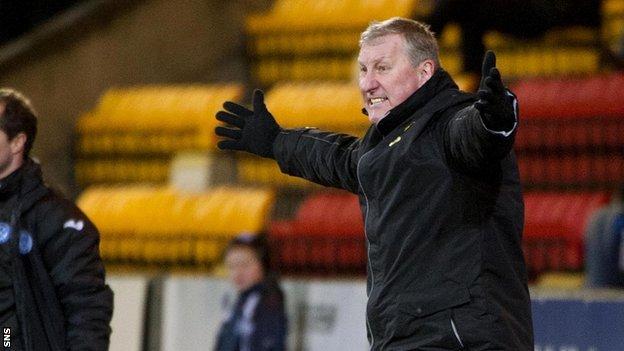 Inverness CT manager Terry Butcher has expressed delight at ending the year in second place in the league table.

Despite failing to score for the first time in the league this season, a draw at St Johnstone leaves his side ahead of Motherwell on goal difference.

"If you'd said at the start of the season by the end of 2012 we'd be second I'd have thought you'd been at my red wine cellar," he said.

"We've earned the right to be there and we want to stay there."

Butcher was also pleased with the performance of his defenders, who, unusually, were more prominent than his free-scoring forward line.

"Both teams had a right go at each other and, in the end, it was stalemate," he said.

"Our back four had to deal with a lot and in the end, I'm delighted with the point.

"It was one of those games where we had to show a different side - one we've not really had to do this season - that of grinding out a result.

"The more the game went on I thought one goal was going to win it.

"I thought towards the end we might just nick it, but St Johnstone had the better chances in the second half."

Next up for Butcher's side is a derby at Highland neighbours Ross County - a match the Inverness manager is eagerly anticipating.

"It's a great match," he said. "Part four of the Highland soap opera.

"There's a lot of tired legs out there, but the boys have got big hearts, and so far against Ross County we've done well.

"They've been good games, tight games, exciting matches and I'm sure Wednesday will be the same."