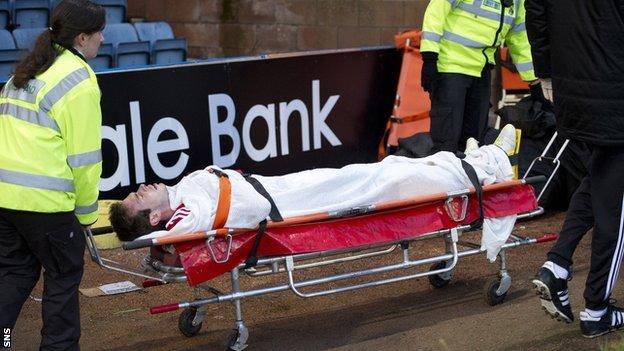 Aberdeen manager Craig Brown says the loss of is a "huge blow" to the club.

The 25-year-old was stretchered off after 31 minutes of the match against Dundee, having been named captain in place of Russell Anderson.

I imagine it won't have serious consequences to his career

"It's a major disappointment for Andy personally, and for the club as well," Brown told BBC Scotland.

"He's a most unlucky guy - it was a pure accident. Very quickly it was apparent that it was a major injury."

Anderson came on to replace Considine and and with Niall McGinn firing a hat-trick.

"He clashed with I think, [Declan] Gallagher of Dundee, and he fell to the ground and you could tell there was something seriously wrong with him because Andy's a very tough guy and would never lie down unnecessarily," explained Brown.

"With the medical provision we have nowadays I imagine it won't have serious consequences to his career - but certainly to this season's play and to our own club it's a major disappointment.

"He had an operation in the past to his hip area but he's been extremely fit this season, he was player of the year at Aberdeen Football Club last year and playing exceptionally well this year.

"He was captain of the team today and it's tragic when any player breaks his leg - but when your captain does it - it's a major disappointment, a real agony for Andy and his family."

Some positive news for Aberdeen was the return to fitness of Ryan Fraser, Rob Milsom and Stephen Hughes, who were all named as substitutes at Dens Park.

But Brown feels his side are now short in defensive areas because of Considine's injury,

"It reduces the options we have at centre-back," added Brown. "We've got excellent centre-halves - Russell Anderson and Mark Reynolds - but if anything happened to either of them we'd be struggling, because Andy was a third one in that area.

"We haven't got exceptional provision there. At the moment we'll be all-right with Anderson and Reynolds but we've got to keep our fingers crossed nothing happens to either of them".