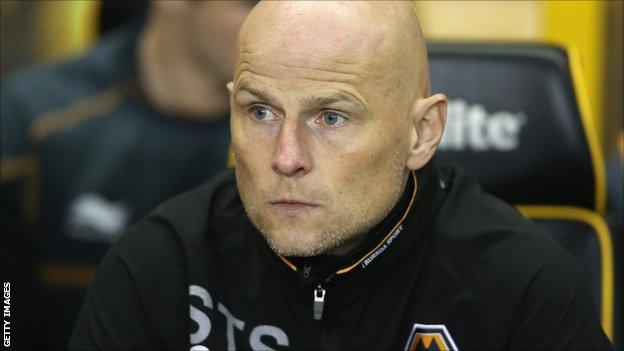 The Norwegian was dismissed by the Molineux board hours after Saturday's shock FA Cup defeat by Luton.

Solbakken, 44, has struggled to make an impact since starting work on 1 July as Terry Connor's successor, with the club sitting 18th in the Championship.

However, the League One club said on Twitter there had been "no official approach to speak to Dean Saunders about any managers positions".

Wolves sit six points above the relegation zone - and have won just three of their last 17 matches in all competitions.

Alex Lawless's winner earned non-league Luton a third-round victory against the four-time FA Cup winners, although Solbakken claimed he was not embarrassed by the defeat.

"There will be a lot of questions over me but that is normal, that's football and I have to take that, it's no problem," he said afterwards. "I can put it right. I'm not embarrassed by the result."

But four hours after the final whistle, Wolves announced that his contract had been terminated.

Head of football development and recruitment Kevin Thelwell, assisted by development coach Steve Weaver, will take charge of first-team training until a new manager is appointed.

A Wolves statement added: "The club would like to offer their thanks and best wishes to Stale, Johan and Patrick."

"The decision was made before the game at Luton. It was not a case of him losing the dressing room because I'm told he never found the dressing room. It was supposed to be a long term plan but the players never really got what he was about."

Solbakken's appointment was announced in May last year and he started the role on 1 July, following Connor's short reign as successor to Mick McCarthy.

Solbakken's team won six of their first 10 league games before a run of nine matches without a victory saw pressure from fans begin to build.

A car belonging to the ex-Wimbledon player was vandalised outside his Staffordshire apartment in November. Solbakken said he called the police to investigate the incident in order to protect his family.

Results improved with a run of three wins in four matches in early December, but Solbakken's future was again under scrutiny following a trio of post-Christmas defeats by Peterborough, Ipswich and Crystal Palace.

Following the 3-1 loss at Palace on New Year's Day, the Norwegian said there was no suggestion from the Wolves board that his position was under threat.