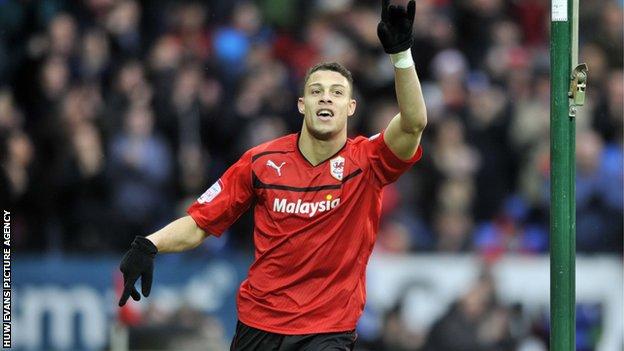 Striker Rudy Gestede reveals working with Olympic silver medallist Darren Campbell is behind his return to action with Cardiff City.

The French striker scored his second goal of the season on his first start of the campaign in Saturday's 1-0 victory over Millwall.

The 24-year-old has missed most of this season with a knee injury.

"I can learn from him [Campbell] because he was one of the best sprinters in the world," said Gestede.

"I have worked with him for a couple of weeks now.

"It was hard because I was injured a lot last season. Now I just want to stay fit and play all season long.

I can learn from Darren Campbell because he was one of the best sprinters in the world," said Gestede.

"It is a big thing to score for a striker. To score in my first half is good for my confidence."

The 6ft 4in striker, who joined the Bluebirds in July 2011, has struggled with injuries, but he hopes his first-half winner against Millwall marks the end of his troubles.

Gestede also revealed that Campbell has changed his running action and he hopes that will ease his injury problems.

Campbell - who won Olympic gold in the 4x100m at Athens 2004 and silver in the 200m at Sydney 2000 - has worked with international strikers such as Andriy Shevchenko and Andy Johnson.

"I try to run in a different way and now I am not injured anymore, so I think it is a good thing for me," said Gestede.

"It's about high knees and small steps. Easy things and now I run in a different way and I think I am quicker on the pitch."

Cardiff recorded a 12th home win in 13 matches and stayed top of the Championship, five points ahead of nearest rivals Hull City.

Gestede knows he is behind fellow strikers Heidar Helguson - rested against Millwall - and Don Cowie in the pecking order at Cardiff City.

"The team has done well and we are top of the league and the gaffer [Malky Macaky] has to make his choice.

"It is not a problem for me. I need to improve and stay focused."