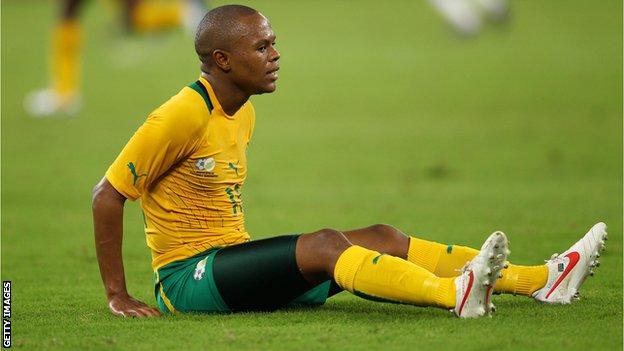 South Africa have named Netherlands-based Thulani Serero in their Africa Cup of Nations squad, despite the midfielder not having played since September.

He is one of seven foreign-based stars in a 23-man squad which coach Gordon Igesund described as "an exciting collection of young players."

Igesund said he was prepared to gamble on Serero's fitness because of the match-winning ability of the 22-year-old from Ajax Amsterdam.

Serero participated in a three-match training camp this week, and convinced the coach that he was fit following three months out with a groin injury.

"It is a dream side that I believe can do us justice at the tournament," said Igesund.

"No matter how much we try, we can't please all the people in the selection process but I believe we have chosen the best that will represent this country well in AFCON 2013," said Igesund.

"We had the best of the best in the camp, with excellent players competing against each other for positions but at the end of the day we had to cut down the squad to that stipulated by the governing body.

"However, those players who are not in the squad should not despair as they are all on stand-by in case of injuries."

Defender Bongani Khumalo, who plays his football in Greece for PAOK Salonika, will captain the side.

Hosts South Africa play warm-up games against Norway on 8 January and Algeria four days later, before the opening match of the tournament against Cape Verde at Soccer City in Johannesburg on 19 January.