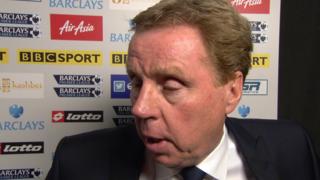 QPR manager Harry Redknapp believes he can get the club "out of trouble" despite suffering a 3-0 defeat at home by Liverpool.

Goals from Luis Suarez and Daniel Agger in the first-half were enough to give the home side their 12th league defeat this season, and keep them bottom of the Premier League.

But despite QPR being eight points from safety, Redknapp says it is "not impossible" to avoid relegation and wants to "see some fight" from his players.