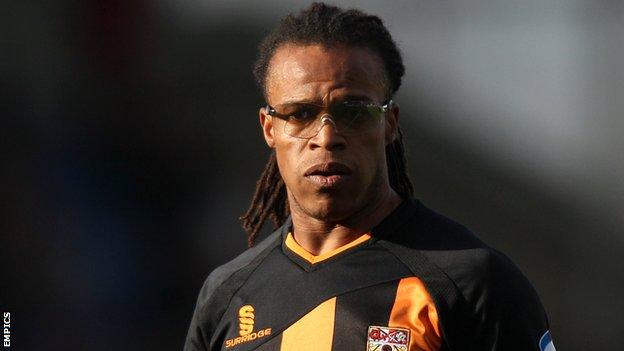 Barnet head coach Edgar Davids says the side should not be affected by the departure of joint-boss Mark Robson.

Barnet drew 2-2 at Exeter in Davids's first game in sole charge after Robson left the League Two side on Friday.

He told BBC London 94.9: "It's still the same. Nothing changed really. Now we need to get the results in.

"We are looking for progress and every game we have to see if there is a positive trend and work on the negatives. So far we are doing OK."

The 39-year-old former Ajax, Juventus, Barcelona and Inter Milan midfielder joined the Bees as a player and joint-head coach in mid-October to work alongside Robson, who had been appointed head coach in the summer.

Barnet lie four points above the relegation zone, having played two more games than the bottom two, and have only lost four of 14 league games since the Dutchman's arrival.

Davids, who won 76 caps for the Netherlands, has reiterated his commitment to Barnet.

"I think this is a very exciting league," he continued.

"We have a long-term strategy. That is why we are always talking about progress.

"It is not only about one win or results for tomorrow but the future.

"We have to build for Barnet to be on a certain level."

Davids says he wants to help the Underhill outfit bring through more players from their academy.

"In the long-term we have to build on the team for next season and the one after and lead a youth academy that really produces quality players," he said.

"We know they are going to leave to bigger clubs but we don't mind.

"We just want to be a facility for the young players. The ones that don't leave can definitely reinforce us."

Davids has made 13 appearances in the Barnet midfield since joining the club but he was forced off against Exeter with injury and is a major doubt for the home match against fellow strugglers Aldershot Town on New Year's Day.

"Banged up, don't think ready for the next game," he tweeted on Sunday.

"Some test[s] to exclude some serious damage."