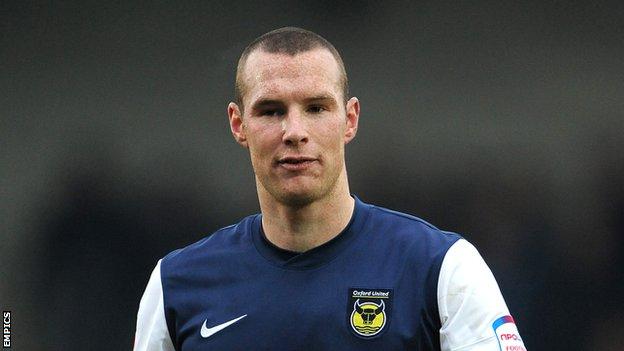 Oxford United will appeal against the red card shown to James Constable against AFC Wimbledon on Saturday.

The 28-year-old was sent off for an alleged elbow on Will Antwi in the 3-0 win and is set to miss four games.

U's manager Chris Wilder told BBC Oxford: "We can't afford to lose anybody. He's gutted. The report will go in and an appeal will go in, 100%.

"It was a little bit of a coming together. I've looked at it, Beano is 100% focussed on heading that ball."

He added: "It is disappointing because it's a real good performance away from home - a lot of good individual performances and collectively good too."

Constable has scored six goals in his last eight games and Wilder does not want to lose his striker for four matches, including an FA Cup tie with Sheffield United and Johnstone's Paint Trophy area semi-final with Southend.

"I'm gutted I've lost a player who is absolutely flying at the moment for some big games," he said.

"We're not trying to spin things. When Beano was sent off near the start of the season [against Exeter] he deserved to go."