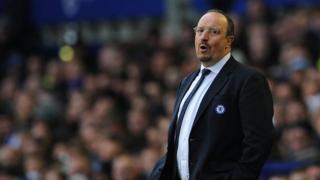 Chelsea interim manager Rafael Benitez would not be drawn on the future of Frank Lampard following his team's 2-1 victory over Everton.

The Spaniard blames a "bad mistake" for Stephen Pienaar's second-minute opener, before Lampard equalised in the latter stages of the first half, then scored a second-half winner.

Speculation over the midfielder's future at Chelsea continues but Benitez will not be drawn on the contract situation saying: "my job is to keep Lampard fit... he's under contract, he's fully committed and he's working hard".