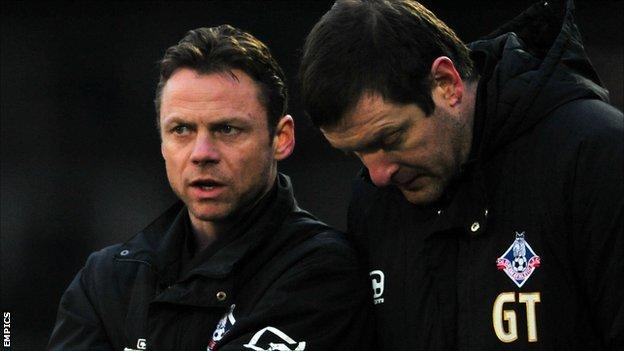 Dickov will be assisted by goalkeeping coach Paul Gerrard, whose own status is also under review.

"The chemistry of our backroom team is not right," chairman Simon Corney said.

"I thank those members of staff who are leaving for their commitment and support in the past, but believe that changes are necessary for the good of the club."

Dickov, a former Latics player along with Taggart and Duxbury, was appointed manager at Boundary Park in June 2010 following Dave Penney's exit.

Taggart, Butler and Duxbury were brought in by the former Scotland international as part of his coaching staff when installed in the post.

He has since posted 17th and 16th place finishes in League One, while the club are currently 18th in the division, five points clear of the relegation zone.

"We appointed Paul Dickov and it has been a vast learning curve for him," Corney added.

"He has received mine and the board's support along the way because we believe that we have the right man on board."