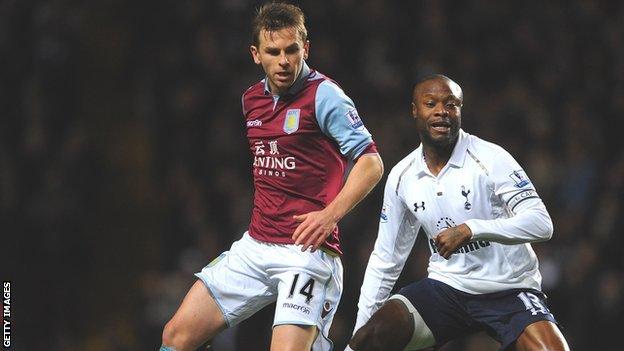 After leaking 15 goals in three games over the festive period, Aston Villa are in dire need of a confidence boost.

And Brett Holman is already looking beyond the New Year's Day Swansea trip for a cure to Villa's Christmas blues.

Villa's next two games are the FA Cup third round tie at home to Ipswich Town and the first leg of the Capital One Cup semi-final at League Two Bradford City.

"That's definitely a great opportunity to win a couple of games and score some goals," the midfielder told BBC Sport.

"But we've got a tough game with Swansea first before those two important cup games.

Are Villa lacking in experience?

"We must say to each other 'Let's start with Swansea' and do some business against them first."

After going six games unbeaten following their 5-0 defeat at Manchester City in mid-November, Villa caved in spectacularly over Christmas, following their club record 8-0 defeat by Chelsea by twice losing heavily on home soil - 4-0 to Tottenham Hotspur and then 3-0 to Wigan Athletic on Saturday.

The Villa fans began streaming out from as early as the 56th minute on Saturday, when Wigan's third goal went in - and those that were left booed their side off at the final whistle.

"I can understand the fans are hurting," added Villa's 28-year-old Australian wide man, who moved from Dutch side AZ Alkmaar this summer after being signed by Villa boss Paul Lambert's predecessor Alex McLeish.

"I've got total understanding for them. But you're not going out there trying to lose 8-0 against Chelsea or 4-0 against Spurs and you can never have a go at the effort the players are putting in.

"I've had some heavy defeats in my time in Holland. And you try to learn from these things.

"We've got to go back to basics and halt the floodgates. But we're not creating enough chances.

"And, when the chances come, you've got to win the game."

It was Holman himself who was most at fault in that respect on Saturday, wasting Villa's best chance with a close-range angled volley against the bar when Villa were still only 1-0 down.

Having then become one of three players taken off by Lambert in a triple substitution midway through the second half, Holman admits that the dressing room are baffled at Villa's sudden downturn, barely a fortnight after their 3-1 win at Liverpool.

And, like Lambert, who has not yet confirmed whether he intends to enter the transfer market before fellow strugglers Southampton pitch up for Villa's next home Premier League match on 12 January, Holman does not necessarily agree that they are lacking in experience.

"People can say that now we're having heavy defeats," he said. "But they weren't saying it when we beat Liverpool at Anfield.

"If the manager feels the need to bring in new players, that's up to him.

"It's something we didn't see coming. And, If we could put our finger on it, we would already have done something about it."