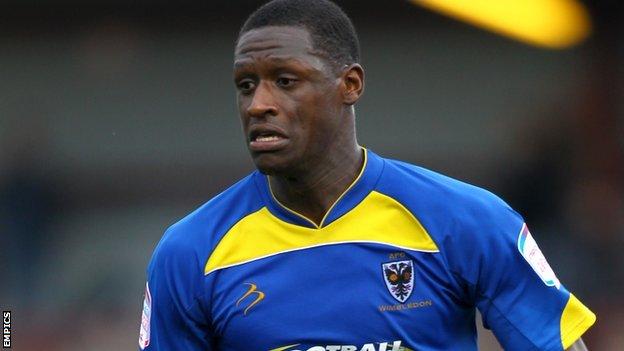 Shrewsbury Town have signed Charlton Athletic defender Yado Mambo on loan for the rest of the season.

The 21-year-old London-born defender only returned to The Valley on Saturday after three months on loan at League Two strugglers AFC Wimbledon.

But he has become the first of Town boss Graham Turner's four January transfer window targets to be landed.

"I'm a no-nonsense, all-round defender," Mambo told BBC Radio Shropshire. "I like to look for a pass but I'm not afraid to hit Row Z.

"It will be the first time away from home for me, far away from my family in London.

"But I'm happy to come here and get some experience in League One to help me play at a higher level back with Charlton and I hope 2013 will be a good year for me. and that I do a good job for Shrewsbury."

Mambo, who has previously spent loan spells at Welling, Eastbourne and Ebbsfleet United, will officially join Town on 1 January - and is available for the New Year's Day trip to much-improved Coventry.

Since making his Addicks debut in a Johnstone's Paint Trophy tie in October 2009, Mambo has made only three more first-team appearances - all of them in the League Cup.

The first of those was actually at the Meadow, in only Turner's second game in charge, when Shrewsbury beat Charlton 4-3 in August 2010.