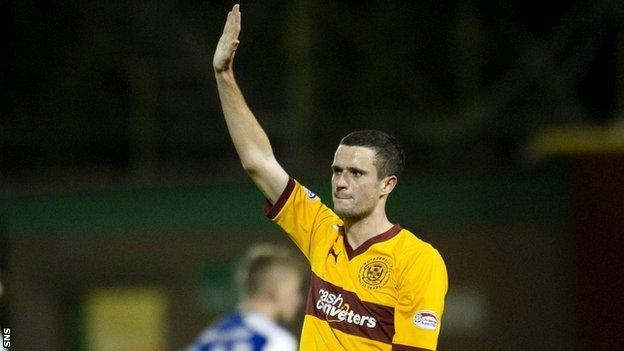 Jamie Murphy is back training with Motherwell having held talks with League One club Sheffield United.

The 23-year-old forward is out of contract in the summer, having come through Well's youth system.

However, Motherwell are hopeful that Murphy will play against league leaders Celtic on Wednesday.

At this moment in time, I'd be confident I'd be only losing Jamie

Murphy will have further talks with Motherwell after training on New Year's Day.

"They're a great club and, if he does go, he goes with our greatest wishes," McCall said of the Blades. "Jamie is a model professional, even for somebody so young. He is an excellent player, no doubt about that.

"He'll certainly be in the side for the game against Celtic."

McCall is hopeful Murphy will be Motherwell's only January departure.

"The board since I've been here have been very good to me and always gone by their word," he added.

"Who knows what can happen in a month? If the club were to get a really good offer for a player then we'd have to look at it. You can never say never.

"I understood we would have to lose one player in the window. We probably decided it would be better to be Jamie for the fact that we would get nothing for him in the summer.

"At this moment in time, I'd be confident I'd be only losing Jamie."