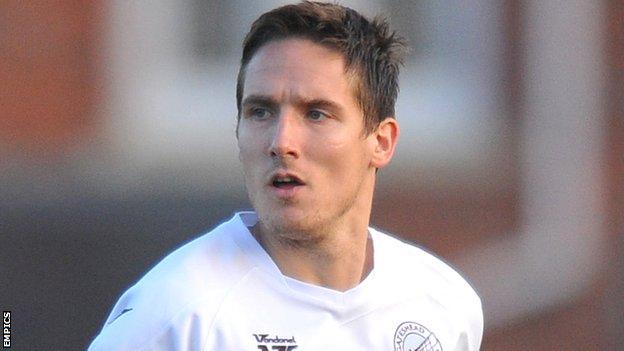 Luton, who produced an FA Cup shock at the weekend by beating Wolves, went ahead through Scott Neilson's rebound.

Janos Kovacs' free header made it 2-0 and Shaw scored his sixth goal of the season off the inside of the post.

Shaw completed his hat-trick with a close-range finish and a header, Adam Boyes scored for Barrow, while Andre Gray broke free for Luton's sixth.

The Hatters, who have three games in hand, are eight points behind leaders Wrexham, who won at Alfreton, while Barrow are five points adrift of safety.

Luton's explosive start came about after Gray's powerful shot rebounded off the crossbar and Neilson, making his first start at Kenilworth Road, scored the game's opening goal after only 82 seconds.

After a spell where Barrow held their own, Kovacs and Shaw scored within two minutes of each other to stretch the lead to 3-0 at half-time. Kovacs' header was fumbled into the net by Barrow keeper Danny Hurst.

Greg Taylor provided the assist on Shaw's second and third goals after the break, before Boyes was set up by Matthew Flynn as Barrow scored from their first shot on target.

Gray was sent free by Alex Lawless for his 10th goal of the season to complete the scoring.

"Our tempo and our pass and move to get into the final third was so quick.

"Greg's (Taylor) delivery was exceptional - he can really whip a ball in.

"Jon [Shaw] knew he was going to deliver it and for him to get a hat-trick was brilliant, as all our strikers are now up and running. He's not going to be dropped on this form."