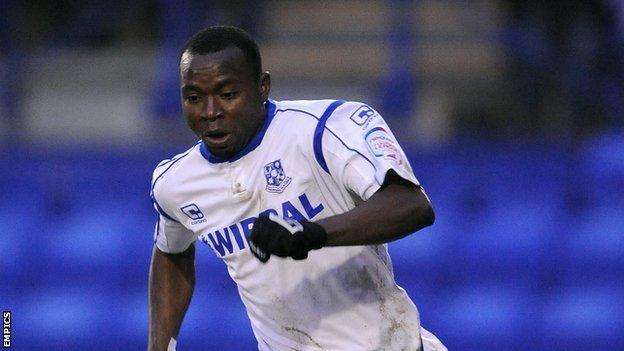 Crawley Town have signed Lateef Elford-Alliyu on a deal until the end of the season after Bury released the striker.

in July but on the eve of the campaign.

He had played five times for the club this season, but found chances limited under new manager Kevin Blackwell and left the Shakers on 31 December.

"Lateef is a player I know well and I'm delighted to be working with him again," Barker told the club website.

"He is two-footed, quick and has an eye for goal and will give us something different.

"He's got a fantastic attitude to the game. I used to have to drag him off the training ground - I like that he wants to keep improving."

Former West Bromwich Albion youngster Elford-Alliyu added: "I'm delighted to be working with Richie Barker again. I enjoyed my time under him at Bury and I'm looking to get my career going again here at Crawley.

"I know the gaffer well and that was definitely one of the reasons I came here. I didn't play too much under the new manager at Bury but that's fine because everyone has their opinion.

"It is good to be here and hopefully I can do well at Crawley."