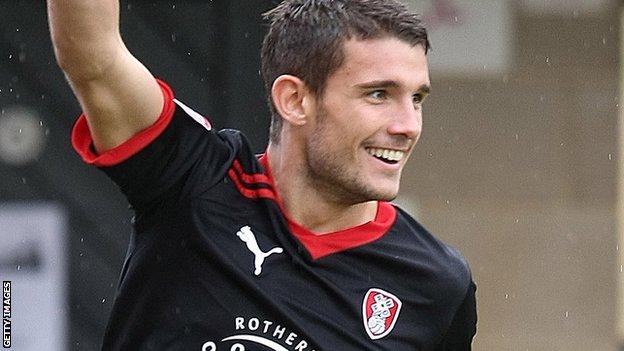 Fleetwood Town have signed Gareth Evans, David Lucas and Mozesh Gyorio on the first day of the transfer window.

Winger Evans, 24, was released by Rotherham on 31 December after 18 months with the Millers.

Lucas, 35, has joined permanently from Birmingham to become goalkeeping coach, as well as providing competition for Scott Davies and Chris Maxwell.

Ex-Canada Under-21 international midfielder Gyorio, 23, has signed a deal until the end of the season.

His last club was FC Tampa Bay in the second tier of football in the United States.

Evans played 49 times for Rotherham, scoring nine goals, but was after finding first-team chances limited in the previous few weeks.

Lucas made a solitary appearance for Birmingham, in the Capital One Cup,

A veteran of 314 league games, he played alongside Alexander for five years at Preston.

The pair helped North End, then managed by David Moyes, to the Division Two (now League One) title in 2000 and to within 90 minutes of the Premier League a year later, featuring in their Division One play-off final defeat by Bolton at the Millennium Stadium.

Alexander told the club website: "We need to get up to the professional level that we're competing with every week in this division, and David brings that professionalism.

"I've always believed that goalkeeping is a very specialist position, and I don't think goalkeepers get enough technical coaching if they're just included in the normal training."

Lucas, who is keen to continue his playing career, added: "This was an opportunity too good for me to turn down.

"I've had a taster [of coaching] with Graham and Chris Lucketti at Preston, working with their youth team and academies on my day off, and it's something I have really enjoyed as I've got older.

"The chance to work with senior goalkeepers is something I've been itching to do, and to combine that with playing while I'm still fit and able is fantastic."