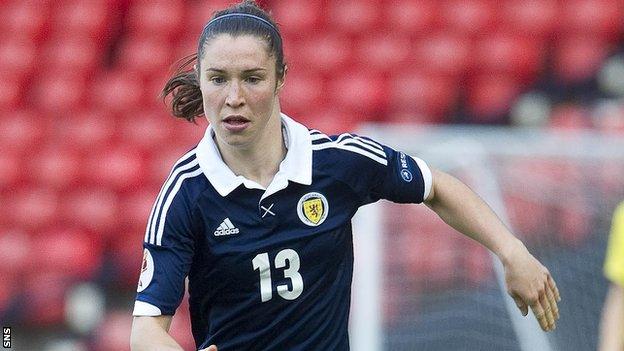 Ross, who joined Glasgow at the age of 16 and has been capped 44 times, is looking forward to a career with the side who finished sixth last season.

I would be hard pushed to think of more dedicated individual

"To play football professionally has always been an ambition," she said.

"So, when the opportunity arose to sign with Vittsjo next season, I felt that it was one I could not pass up."

In Sweden, she will join international team-mate Ifeoma Dieke, who signed for Vittsjo last year from Boston Breakers but missed the end of the season after picking up a cruciate ligament injury playing for Team GB at the Olympics.

Ross also becomes the second Scotland international to make the move to Sweden in recent weeks.

But it was her performances for City in the Champions League and with Scotland that alerted the Swedish club to her talents.

Glasgow coach Eddie Wolecki Black said: "As the new season commences we have to accept that some players will leave us and seek a fresh challenge.

"Jane has now achieved so much and is still only 23 years of age.

"Every year has seen her strengthen her reputation and consistency.

"I would be hard pushed to think of more dedicated individual.

"She has done everything in her power to improve her game.

"Her rise over the past two seasons has been remarkable, not only establishing herself as a very important player for the club but also on the international stage.

"She has now added goals to her armoury and, allied with her pace, skill and work rate, her new club in Sweden are getting very much a finished article.

"Her goals ratio for both club and country are fantastic and it's with a heavy heart we say goodbye."

Ross joins a small band of Scottish internationals plying their trade outside their homeland.

In addition to Dieke and Lauder playing in Sweden, forwards Kim Little and Jennifer Beattie are in England with Arsenal.