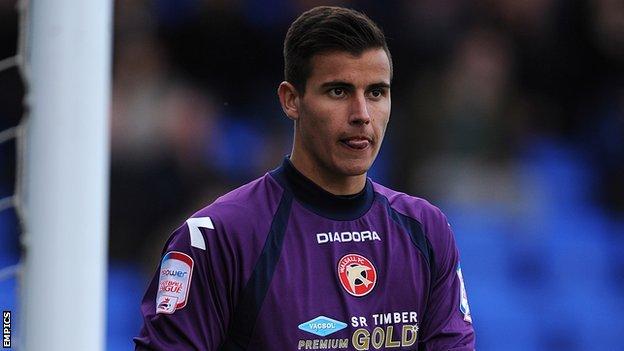 Walsall have re-signed Nottingham Forest keeper Karl Darlow on a month's loan with a view to extending the deal for the rest of the season.

Darlow, 22, impressed in his eight-game stay at Bescot earlier in the season before Forest recalled him when deputy keeper Dimitar Evtimov was injured.

"It was unfortunate when Forest had to recall him shortly after he had signed an extension to his deal here."

The on-loan keeper went straight into the Walsall team for the New Year's Day home game against Stevenage.

Darlow, who was on Aston Villa's books as a youngster, joined Forest's Academy at the age of 16.

He made his league debut for Forest as a second-half substitute for Lee Camp in a 3-0 win at Crystal Palace on the final day of the 2010-11 season.

He then spent the final two months of last season out on loan at Blue Square Bet Premier side Newport, conceding only six goals in eight games.

Darlow made his first start for Forest in the 1-0 League Cup win at Fleetwood in August before joining the Saddlers in late September.