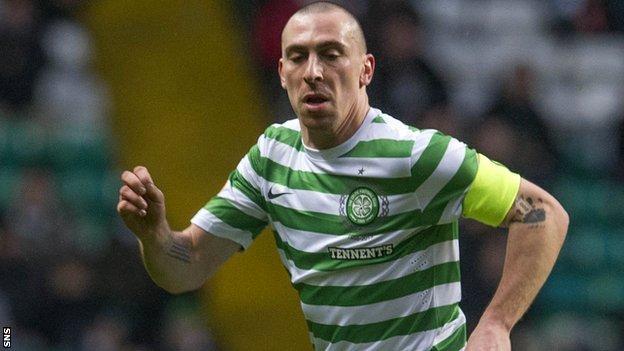 Neil Lennon's side are six points ahead of second-placed Inverness Caledonian Thistle with a game in hand.

But Brown believes that defeat by Hibernian on Saturday shows the league remains up for grabs.

"The league is far from over, it is definitely not done and dusted. It was shown against Hibs it is hard no matter where you play, home or away," he said.

It is going to be tough against Motherwell

"It's been difficult for us recently, but we have to kick on with our home form and get back to winning ways. We have to keep going."

And the Scotland international is wary of his side's next opponents, Motherwell, who travel to face Celtic in Glasgow on 2 January.

"We are a few points clear and we have a game in hand as well, so that is going to help us, but it is going to be tough against Motherwell," said Brown.

"They have got some good young players, they started off the season well and then had a little dip, but they seem to be going really well again.

"So it's going to be a tough game, it is going to be hard, but hopefully there will be a big crowd and we get back to winning ways."

However, the midfielder doesn't believe major changes are required to get the Scottish champions back on track.

"We lost our unbeaten record to Hibs, so we need to get back to winning ways, get the winning mentality back at Celtic Park and hopefully we can get our confidence back up," he said.

"We played really well against Hibs. I think we had about 70 to 75 per cent possession in the second half and we created chances. We just couldn't finish it off."

The visit of third-placed Well is Celtic's last game before the winter break, which Brown feels will be of benefit to all SPL clubs.

"There are a few people out and a few people have niggles here and there, so I think it will be the good for every team," he said.