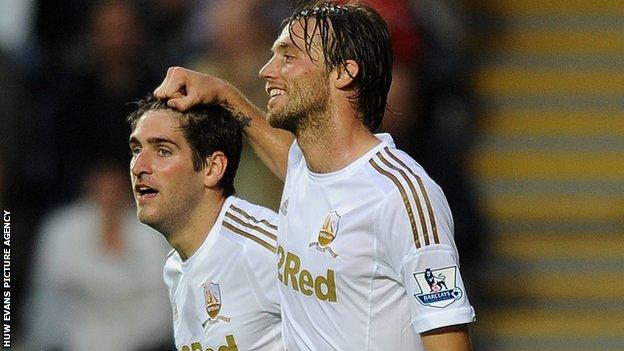 Danny Graham has urged Swansea boss Michael Laudrup to partner him with Michu in the Premier League.

And he believes playing alongside £2m "buy-of-the-season" Spaniard Michu would prove a hit.

"I'd like to play with Michu and given a run of games I feel as though we can build a good partnership and score plenty of goals," said Graham.

Graham expects to have talks with Laudrup soon about the player's future, having scored in the that preceded the draw against Villa.

Graham was a Swansea club record £3.5m buy when former manager Brendan Rodgers recruited him from Watford in June 2011 and he hit 14 goals from 39 appearances last season.

Michu arrived at the Liberty Stadium last summer from Rayo Vallecano as an attacking midfielder but current Swans boss Laudrup has utilised the Spaniard as Swansea's lone striker.

The positional switch has seen Michu reap 14 goals from 22 appearances, but that has often left Graham looking on from the sidelines.

"Michu's been superb and he's been the stand-out player in the Premier League - definitely the buy of the season so far, a couple of million pounds.

"So I've always said I'd like to play with Michu and given a run of games I feel as though we can build a good partnership and score plenty of goals.

"I've seen the reports of what the gaffer said and he wants to talk to me and I'll sit down and talk.

"Obviously I want to be playing football - that's why I'm in this game.

"But I'm happy to stay [at Swansea] and... score a few more goals along the way."