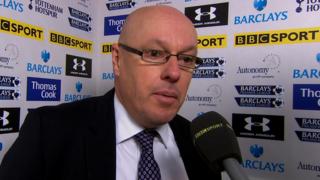 McDermott not daunted by defeat

Reading manager Brian McDermott says he saw enough from his players in the 3-1 defeat by Tottenham to believe he can keep the club in the Premier League.

McDermott admits it was frustrating to concede an equaliser so soon after taking a first-half lead through Pavel Pogrebnyak, and says his team were "in the game" at 2-1 when they missed two good chances.

The Royals boss, whose team are 19th in the table, says they have a game plan that has been paying dividends over the past few games and he has no doubt they can move out of trouble.