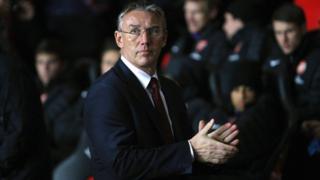 Southampton boss Nigel Adkins is happy with the performance of his side as they claimed a deserved 1-1 draw against Arsenal at St Mary's Stadium.

Adkins was pleased with the defensive shape of the Saints and feels they offered plenty of attacking threat as well.

Southampton took the lead through Gaston Ramirez but were pegged back by a Guly do Prado own goal which Adkins feels was lucky.