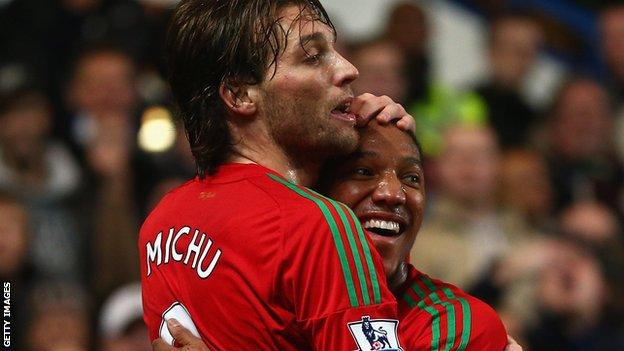 Swansea won at Chelsea for the first time in 87 years to head into the Capital One Cup semi-final second leg with a precious two-goal advantage.

The hosts dominated in the first half but an error from defender Branislav Ivanovic allowed Michu to curl home.

The home side continued to press but Ivanovic was again at fault in stoppage time when Danny Graham seized on his poor backpass to seal the win.

"If you look at Bradford and Swansea they both had a plan and were highly disciplined. Swansea really deserve to come away from this game with something. Michael Laudrup has communicated his plan, got his players focused and Michu stands out in sacrificing his creativity to do a job and they all worked very hard together. Chelsea are relying too much on the individual players rather than a collective plan but I would have expected them to have scored a couple of goals from the chances they had."

Demba Ba thought he had snatched a late goal only for it to be ruled offside.

The win puts Swansea firmly in command heading into the second leg at the Liberty Stadium on 23 January as they look to end a 100-year wait for a first major trophy.

Chelsea, though, were the architects of their own downfall.

They enjoyed plenty of possession throughout the encounter but were let down by poor decision-making in the final third.

The home side spent the initial exchanges patiently passing the ball around as they probed for potential openings in the Swansea backline.

They were nearly rewarded in the 11th minute when Oscar and Eden Hazard combined to unlock the Swansea defence and present Ramires with a chance on goal, but the midfielder's toe-poked effort lacked power and was comfortably saved by keeper Gerhard Tremmel.

That early chance was not a sign of things to come, however, as play once again settled into a pedestrian pace, although Chelsea continued to dominate.

The home side did not trouble Tremmel again until the 26th minute when Hazard surged into the Swansea area before squaring a pass for the unmarked Juan Mata, but the Spaniard's low shot was gratefully scooped up by Tremmel.

By now Chelsea were looking a confident side and Mata almost made amends for failing to make the most of that opportunity minutes later when he raced onto Oscar's smart back-heel but his shot trickled agonisingly wide of the far post.

It seemed only a matter of time before Chelsea would take the lead but poor defending instead saw Swansea snatch the opener six minutes before the break.

Ivanovic dithered with the ball just outside his own area and Jonathan de Guzman took full advantage, stealing possession before immediately passing to Michu and the in-form striker's curled effort flew beyond Ross Turnbull, taking his total for the season to 16.

Michu was clearly a player brimming with confidence and he attempted an audacious overhead kick early in the second half, but the ball sailed harmlessly over Turnbull's goal.

Tremmel maintained his side's slender advantage just before the hour when Hazard rolled the ball across the edge of the area for Luiz but his well-struck effort was kept out by the Swansea keeper.

The visitors were clearly content to try and protect their lead, much to the frustration of the home side, who continued to try and carve out an opening.

Ba quickly made his presence known and felt he should have had a penalty as the game entered stoppage time after clashing with Tremmel when challenging for possession, but instead he was booked for diving.

Any hopes of Chelsea snatching an equaliser were ended shortly after as Ivanovic's poor backpass allowed substitute Graham to run in, round the keeper and fire into the empty net.

Chelsea thought they had snatched what would have been a potentially important late goal when Ba powered a shot into the net from Lampard's knock on, but the striker had strayed just offside.