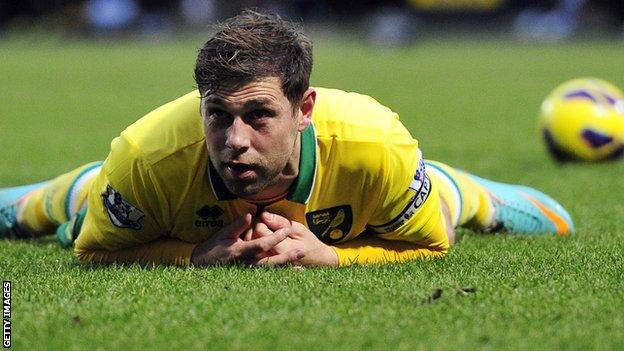 Holt has played once in the Canaries' last four games, while Morison missed Tuesday's

"It's an area that of course we have looked at."

Hughton continued: "But the best way of doing business is very much behind the scenes."

Norwich's joint-top scorer Holt, 31, picked up against Wigan on 15 December and has only featured in the

Morison, 29, replaced the frontman for the on Saturday, but had to sit out the Hammers clash with an injury of his own.

"Grant's very close. Stevie's got a slight thigh strain which will certainly keep him out for a couple of weeks," said Hughton.

"Whether it will be longer than that we'll be able to determine over the next couple of days."

Norwich have now won just one of their last five games after a run of 10 without defeat and Hughton is prepared to strengthen his side in the January transfer window.

"We're working hard," he said. "There's no doubt about that. You hope you can be successful. But it's about making sure anything we do is right for this football club.

"We won't look to strengthen the squad in areas that aren't right for us. If we see there is an opportunity, and it's right, we'll endeavour to do it."