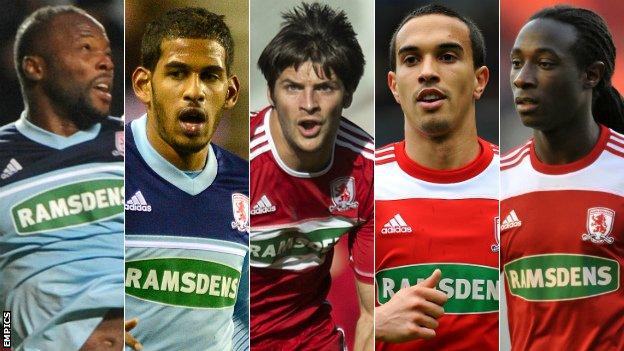 Manager Tony Mowbray has said he is keen to determine the circumstances behind a spate of hamstring injuries to the Middlesbrough first-team squad.

"We are looking long and hard into why we have similar injuries to so many players," Mowbray told BBC Tees.

"The workload they put in every week to achieve what they've done so far is possibly catching up with a few."

Mowbray continued: "A lot of the injuries are game injuries, things they've picked up in games, and sometimes it happens in football."

Emnes, Seb Hines, Andre Bikey, George Friend and Faris Haroun were all absent for the trip to Pride Park with the same knock, while Jonathan Woodgate has also been affected by the injury earlier in the campaign.

Mowbray now has the opportunity to strengthen with the opening of the January transfer window, but is reluctant to add numbers to a squad that will be bolstered.

"The injuries are all grade-ones, they're all fatigue injuries," Mowbray added. "Nobody's has had a sprint related hamstring where they've ripped it six centimetres and are out to six to eight weeks, they're all two weeks maximum.

"They're minor strains, there's no panic. Thankfully there's a bit of a break from the league programme and we'll give a few players a rest.

"Hopefully when the next league game comes around we can find ourselves in better shape."