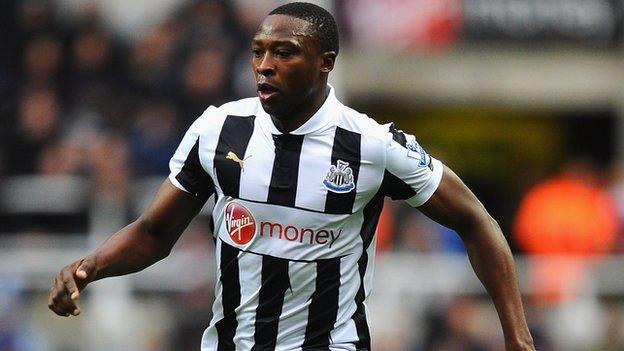 Nigeria have overlooked Newcastle striker Shola Ameobi for their 2013 Africa Cup of Nations squad after he failed to answer their telephone calls.

Ameobi was named in the preliminary squad by coach Stephen Keshi.

But it was later announced by Newcastle boss Alan Pardew that the 31-year-old would not travel to South Africa.

"Shola's refusal to answer calls gave Keshi no other option than to allow him to concentrate on his club," said Nigeria's media officer Ben Alaiya.

"The coach and team secretary made several attempts to reach Shola but there was no answer. The coach waited to hear back from him but a call never came.

"A decision on the next move will be made at the appropriate time."

Ameobi made his debut for Nigeria last November in the friendly against Venezuela and Keshi was hopeful the former England under-21 international would be part of his squad for the competition, which kicks off on 19 January.

But he has now become the second England-based player after Danny Shittu to snub the Nations Cup in order to play for his club.

Millwall defender Shittu wrote to the Nigeria Football Federation (NFF) and asked to be left out of the tournament.

The NFF rejected his letter and insisted he must make himself available but coach Keshi approved Shittu's request.

Meanwhile, a blend of locally based and European-based players will play for Nigeria against Catalonia in Espanyol on Wednesday before another warm-up game against Cape Verde.

The two-time champions have been drawn in Nations Cup Group C with Burkina Faso, Ethiopia and defending champions Zambia.