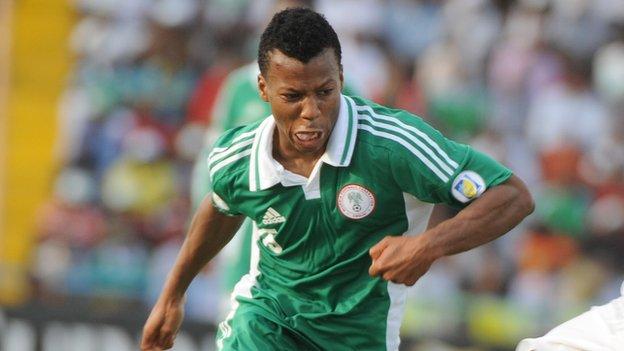 Nigeria striker Ikechukwu Uche says a chaotic build-up to the Africa Cup of Nations should not distract the team from delivering in South Africa.

The Super Eagles failed to qualify for the last tournament in Gabon and Equatorial Guinea but the two-time winners are still rated as one of the favourites for the tournament which starts on 19 January.

Club versus country rows and several off-the-field problems have plagued the West African side since they secured qualification in October.

Asked how difficult it had been for players to focus on football amid so many distractions, Uche replied: "It's not that easy but it's normal preparation for competition, hopefully we can all come together and do well.

"We can't use all these [problems] as an excuse. We must overlook these things and work extremely hard before and during the tournament.

"Our fans expect a good outing but you can't talk about getting into the final without playing the first game to start with.

"The important thing is to prepare very well, then we can take it one step at a time."

Prospects have in the past been high for Nigeria heading into international tournaments but the country's sports minister Bolaji Abdullahi believes the Super Eagles could benefit from having no expectations on them heading into next year's tournament.

Uche, who was the top scorer during the qualifiers with three goals, says Nigerian players must perform better than they have done at recent tournaments.

"Expectations or not, we should not go into a tournament with that mindset of lowered expectations, " the Villarreal striker told BBC Sport.

"We are professionals. All the teams travelling to South Africa stand a chance so we must also give our best and hopefully that will be enough."

He is also wary of 'unknown' opponents Burkina Faso, admitting: "I don't know much about Burkina Faso. We've played against Ethiopia and Zambia - we are familiar with the way they play and their players.

"We hope to have a closer look at our opponents and their recent games when we get together.

"Our fans need to believe in the team, we know it will be tough and difficult but all they can do is to give us their support."

Regarded as continental giants, Nigeria have won the Nations Cup only twice, on home soil in 1980 and in 1994 in Tunisia.