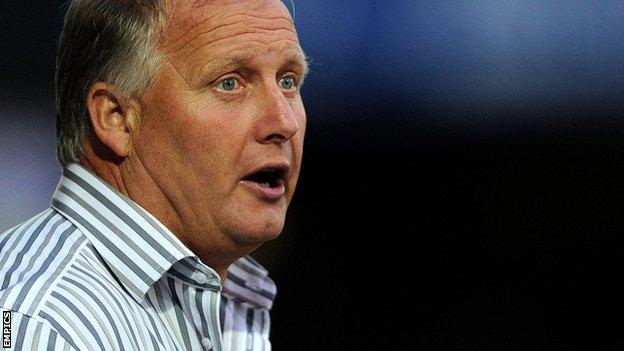 Manager Kevin Blackwell fears Bury's financial troubles could result in him losing some of his senior players during the January transfer window.

The League One strugglers are after receiving a short-term loan from the Professional Footballers' Association.

The club hope the embargo will be lifted by the middle of January.

"We're being dictated to by a crisis that we should be managing, and the crisis is managing us," said Blackwell.

It was a shock to me when we went into the embargo. I was only told the day before. I don't know what date we're coming out [or] if we are coming out

When asked if players could depart, he told BBC Radio Manchester: "Who knows? That's the problem that the club is in at the moment.

"The directors are doing what they can but, at this moment in time, I really couldn't tell you if someone's coming or going."

Former Sheffield United, Leeds and Luton boss Blackwell took charge of the Shakers, who are currently 22nd in League One, in September.

His arrival at Gigg Lane but Bury have failed to win a match since the embargo became active on 10 December.

"It was a shock to me when we went into the embargo," added the 54-year-old. "I was only told the day before. I don't know what date we're coming out [or] if we are coming out.

"I think you should be told what you're working to and that frustrates me, but they're decent people here.

"The lads have been fantastic because we only had three or four points when I came here.

"What we've got to do - the manager and the directors - is support the players. That means signing decent players when we get the opportunity to.

"Hopefully, if we can lift the embargo and find some money from somewhere, we may be able to do that."