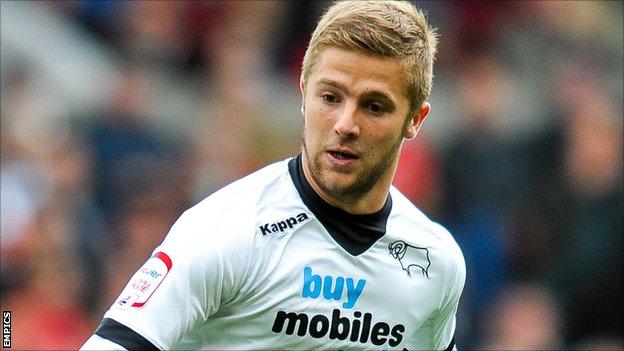 Derby County manager Nigel Clough was encouraged by the performance of winger Michael Jacobs in an unfamiliar forward role against Middlesbrough.

The 21-year-old scored his second goal this term in the in support of Conor Sammon, having spent much of his Rams career out wide.

"He played wide at Northampton but as soon as we saw him we fancied seeing him playing in the hole."

Clough added: "It's similar to what Jamie Ward does for us, and we thought it was time we gave him a go."

Jacobs came to the club from Northampton for an undisclosed compensation fee having turned down a new deal at Sixfields.

Meanwhile Ward and midfielder Craig Bryson were absentees for the visit of Mowbray's high-fliers, with hamstring and knee injuries respectively.

"Craig tried to do a bit in training but wasn't comfortable, while Jamie we're probably looking to the week after," Clough continued.

"He's felt it [the hamstring], he's got some scar tissue because he's had so many problems with it over the years and that is irritating him at the moment.

"We'll see how he goes, on Friday we'll give him a running session to see how he feels."