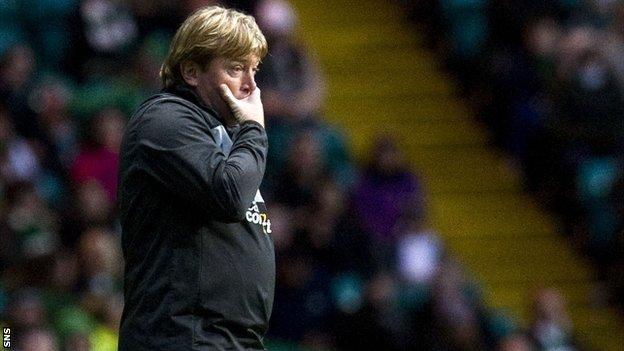 Motherwell manager Stuart McCall felt it was inevitable Celtic would go on to win after his side missed a penalty in their Scottish Premier League meeting.

"The writing was on the wall when we missed the penalty," McCall said.

"With Forster, when you look at him in goal, if he goes the right way, he's such a big frame."

He added: "I think it's a great save.

"It [Hateley's penalty] is quite high, I don't know how far in the corner it was.

"Then we had a good shout for a second penalty.

"Jamie [Murphy] says Forster's brought him down, but you won't get two here."

But Motherwell gradually built up their chances, too, as Murphy tested Forster on a couple of occasions.

"The first 20 minutes we were a bit nervous and edgy.

"But we grew into the game and I thought for good spells in the second half we had chances and opportunities which we don't normally get here.

"I thought with the blocks we got and the defending, all -ound it was just a really good spirited effort and [I'm] bitterly disappointed not to get something from the game."