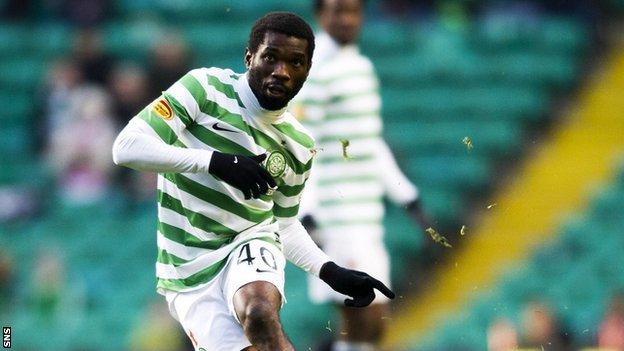 Former PSV Eindhoven midfielder Ibrahim Rabiu has switched from Celtic to Kilmarnock after failing to become a first-team regular in Glasgow.

Nigeria Under-23 international Rabiu made only two appearances for Celtic since signing less than a year ago.

His only start came in last month's 1-1 draw with Arbroath in the Scottish Cup.

Rabiu had joined Sporting Lisbon from Gateway in his homeland before moving to the Netherlands with PSV.

However, he left the Eredivisie outfit by mutual consent in December 2011 because of a shortage of first-team starts before a successful trial with Celtic last January.

Rabiu has been named in Nigeria coach Stephen Keshi's initial 32-man squad for the Africa Cup of Nations.

The Scottish Premier League is heading into a two-week winter break.

However, should Rabiu make the final selection, due to be made by 9 January, Kilmarnock could be denied the services of their new signing until 5 February depending on Nigeria's progress during the tournament.