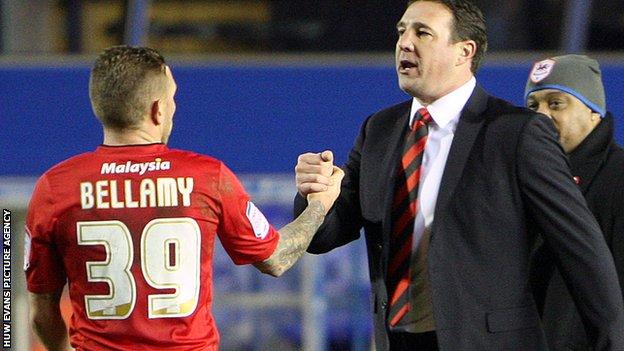 Malky Mackay believes Craig Bellamy's performances have been key in Cardiff City establishing a seven-point lead at the top of the Championship.

Bellamy was in inspired form on Tuesday as Cardiff won 1-0 at Birmingham City.

And manager Mackay believes the veteran forward's appetite for hard work is an example to the rest of the squad.

"Top players stay top players because of their work ethic and you look at him and see [that] and my players see that," he said.

"Flash-in-the-pan players have got talent and don't have a work ethic and over a period of years disappear.

"I'm absolutely delighted that we've got Craig. He's someone from the first day [who] has applied himself and [has] absolutely no ego.

"There's a lot of goodwill towards Craig Bellamy inside our football club and he reciprocates that by the respect he's got for the people that he's working with - coaches and players."

Bellamy's second spell with the Bluebirds has been hampered by knee and ankle injuries, but he started all four of Cardiff's victories over the festive period.

And Mackay says the former Liverpool and Manchester City star is relishing his role as Cardiff bid for promotion to the Premier League.

"Craig has got a desperation to play for the football club at the moment and has been enjoying his football," he said.

"He's got over his couple of knocks and he's got match fit and that's the two big things that count.

"But after that the player's got to be desperate to want to play football and I had to drag him off."

"He's a Cardiff boy and I think that shows when he's playing on the pitch," he said.

"On a daily basis he's working really hard. His fitness levels are unbelievable."