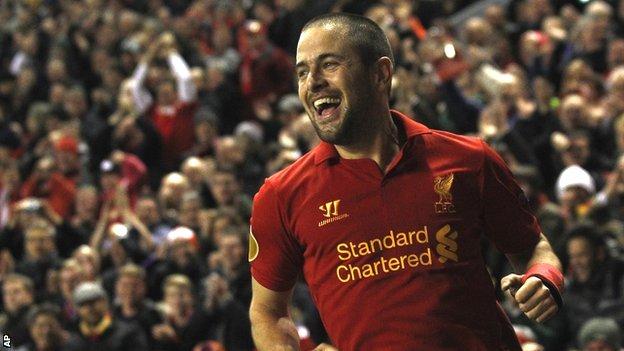 Liverpool midfielder Joe Cole is expected to complete his move to West Ham in time for Saturday's FA Cup tie with Manchester United at Upton Park.

The 31-year-old will undergo a medical on Thursday and is set to rejoin his former club on an 18-month contract.

Cole, whose move comes after on-loan midfielder Yossi Benayoun returned to Chelsea, must be registered by 12:00 GMT on Friday to face the Red Devils.

Liverpool boss Brendan Rodgers said: "It will be a terrific move for Joe."

Cole has struggled to impress at Anfield following a free transfer move from Chelsea in 2010.

Any move to West Ham would have to be permanent because the London club already have one Liverpool player on loan - striker Andy Carroll - and are prevented from adding a second.

Cole, though, would be available on a free transfer as Liverpool are prepared to cancel his contract and negotiate a settlement.

Talking on Wednesday, Rodgers added: "I spoke to Joe earlier. He is a really good lad and has been brilliant during my time here."

The player came through the youth ranks at Upton Park before moving to Chelsea for £6.6m in 2003.

He won three Premier League titles and two FA Cups in a seven-year stay with the Blues.

After failing to agree a new contract he moved to Merseyside but has not been able to enjoy the same impact and has made only six substitute appearances this season.

QPR have also been linked with Cole, but manager Harry Redknapp told BBC Radio 5 live he was resigned to missing out.

"He would be great around the place - he is a great player - but West Ham came in at the last moment and it was difficult because West Ham is his club and you will always associate Joe with them.

"That is where he started out. The fans will love having him back there and I wish him all the best because he is a fantastic boy."

Heading out of West Ham is Benayoun, whose has been ended by a knee injury after just six appearances.

The 32-year-old Israel international is expected to return to fitness in the next two weeks and has attracted interest from Southampton, Fulham and Wigan, but Chelsea are yet to receive any formal offers.