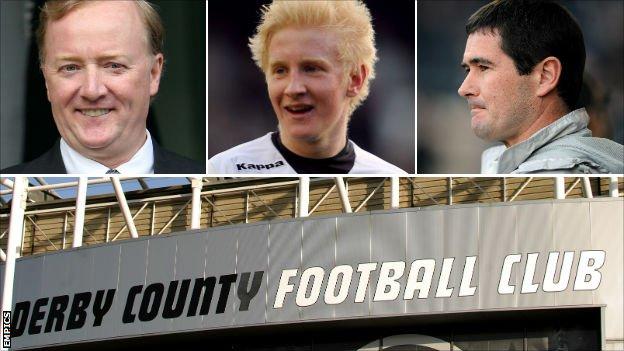 Chief executive Sam Rush has said Derby County will not be forced to sell players to balance the books and described a rumour the club needs to raise funds as "absolute nonsense".

The former head of football operations at Wasserman Media Group dismissed the notion the club required £1.8m to address a shortfall in the budget.

Rush told BBC Radio Derby: "There will be no way any player will be leaving the club unless we decide so.

"It won't happen on my watch."

Hughes is still just 17 and only made his first-team debut in November 2011. However this season, the Surrey-born but Derbyshire-bred midfielder has been a revelation - winning the November young player of the month award to add to a first England Under-21 cap.

He added: "I'm joining a club that is going forward, not one that has to sell its best assets. The need to sell any players is far from the truth."

Derby's emerging talents such as midfielders Will Hughes and Jeff Hendrick have attracted attention from top-flight clubs, testament to the Championship side's solid youth policy.

In the past, players such as Malcolm Christie, Chris Riggott, Seth Johnson and Rory Delap were moved on when transfer fees became too tempting to resist - a situation Rush is determined to avoid.

"There is perhaps a view about Derby that may be held in the football community that the club could be a soft touch, that Derby has sold its assets in the past cheaply," he said.

"It's been some years since Derby has assets that have really been courted by the Premier League and big clubs, and perhaps it strikes me that this is an opportunity to unsettle Derby."

Rush is also keen to express the board's support for manager Nigel Clough, with the club currently lying three points off the play-offs.

The former Burton Albion boss has invested wisely, largely from the lower leagues, and has seen imports such as John Brayford and Paul Coutts establish themselves in the Rams first-team.

"The squad is exciting but it would be wrong for me to comment on team matters, the manager has had a very good start to the season," Rush continued.

"He's an experienced established man and he's had a very good summer. The signings he made in the summer were extremely good and it strikes me that they're all working well.

"Dialogue with Nigel will continue, we will talk and assess on a regular basis about the squad."

Hendrick was born in Dublin, Republic of Ireland and moved to Derby's academy where he progressed to his debut as a substitute against Burnley in April 2011. His full debut came in a win against Blackpool that August, while he wrote his name in Rams folklore with a winner against rivals Nottingham Forest later that month.

At that stage the club were in the Premier League after promotion from the Championship the previous campaign although they were relegated later that year.

The past five seasons have seen changes at the club, with managerial switches and a failure to return to the top flight, but Rush is convinced the board's interest in Derby remains strong.

"Their commitment to Derby is enormous, and how they believe [in] it will continue to grow," Rush said.

"I'm the face of the board, so I'm here, I've been to every game home and away and will continue to do that now I've taken up my post full-time.

"There's usually a board member at home games over here and they attend regularly.

"The owners have put in a large amount of money, I'm comfortable putting it on record that they've spent in excess of £50m on the football club and have taken nothing out of it.

"There's no question of them making huge returns on the investment, and what they want to do is build a football club that can sustain and develop in the long-term."