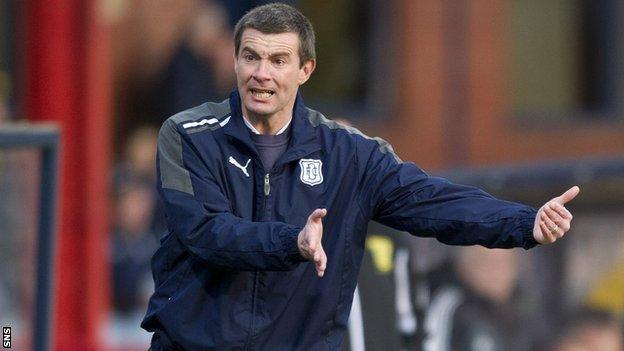 Dundee manager Barry Smith's future will be discussed at a board meeting later this week.

It is understood that no decision has been taken at the moment regarding the 38-year-old's position, but the matter will be on the agenda at the meeting.

The news emerged left Dundee nine points adrift at the foot of the Scottish Premier League.

Smith said afterwards he hoped to be given money to strengthen his side.

"The board have intimated that there'll be money there to spend," he told BBC Scotland. "How much I don't know.

"Obviously we need to bring in players to boost the squad and bring in a wee bit more quality."

Former Celtic, Dundee and Valur defender Smith has been Dundee manager since 2010.

They finished last season as runners-up in Division One but were brought into the Scottish Premier League at late notice, replacing Rangers with the Glasgow club heading for liquidation.

And the Dens Park boss felt his side lacked a "killer touch" in the Tayside derby defeat but was still pleased with the effort of his players.

"I still think we've got quality here, we just need a wee bit more in depth," he added.

"I'm definitely still getting all the work-rate and I know the players are working hard.

"No-one likes to be in this position. We've been through a lot of hard times at Dundee and this is just another one.