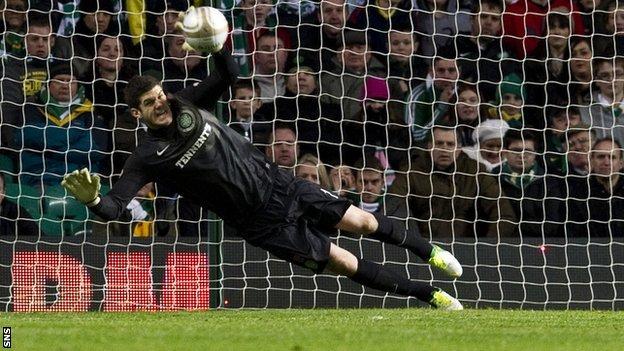 Coach Garry Parker praised goalkeeper Fraser Forster as Celtic extended their lead at the top of the Scottish Premier League to nine points.

"He's a great goalie - he's in the England squad and it's fully deserved," said Parker.

"You always fancy him at penalties, he's a big lad and he's a good goalie."

Parker also defended Forster over the movement off his line in the run-up to the penalty, which resulted in a booking for the former Newcastle player.

"I think he got booked for that, you could see what he was doing - but he's a great goalie and it was a great save," Parker said.

"We've played very well, we created a number of chances. We just couldn't break them down - they defended well.

Parker, who described the upcoming winter shutdown as "a much-needed break" also maintained that Celtic were not taking winning this season's title for granted.

"We just wanted to win the game and go nine points clear," he added.

"We've got that game in hand over Inverness and we've just got to keep going and winning games.

"Everybody's beating everybody - we lost last week, so it's difficult.

"They've played a lot of football, we've had a lot of games. We're in a position where we want to be and it's a good time to have a break."

Meanwhile, Celtic defender Kelvin Wilson hopes to prevent a two-match ban when he appears before the Scottish Football Association.

Wilson was issued with a notice of complaint following an aerial challenge on Dundee's John Baird at Dens Park last month.

"It wasn't an elbow so I don't know where the violent conduct has come from," said Wilson of his charge.

"To be fair the boy said he was grabbing my shirt and I was just trying to get away, which I was and unfortunately I caught him.

"If you go into a court of law and someone gives a statement like that then it is taken into consideration so I hope that is the case.

"If it goes against me I will just have to get on with it but hopefully the people will see sense and it will get resolved."