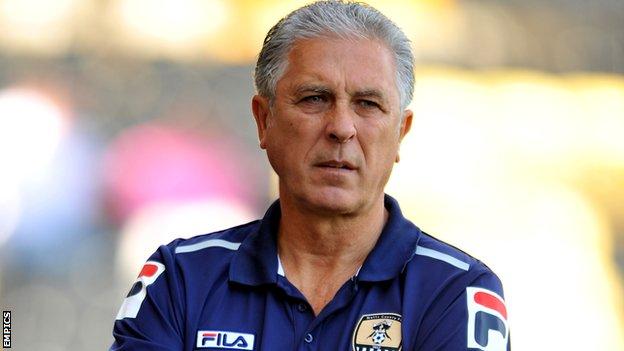 Former Wolves and Walsall boss Colin Lee says he would be interested in the vacant Plymouth Argyle manager's job.

Lee, 56, is and has strong links to Devon having previously played for and managed Torquay United.

"If Plymouth Argyle want to talk to me they will have to go through Notts County as I am contracted to them," Lee told BBC South West Sport.

"I'm not going to lie, it would be something I would be interested in."

Devon-born Lee has experience of keeping sides in trouble up in their division, having taken over at Walsall in January 2002 when they were in the relegation places of the old First Division.

He also helped Torquay to stave off relegation from the Football League in 2007 when he was appointed as director of football alongside Keith Curle, who he now assists at County.

"It's a job that I've experienced before, I've been able to help teams in this situation before and my CV would show that.

"I took over at Walsall when they were adrift at the bottom and we stayed up and we did the same thing the following year.

"I saved Torquay in the last 10 games and I still get texts form the lads that did that.

"You've got to be able to know what you're doing when you go in to give the club the best chance.

"I keep a close eye on all the Devon teams and none of them are massively wealthy so they're not going to have hundred of thousands of pounds to spend.

"But you've got to have a plan and if you go in with a clear plan of what you're doing then you've got every chance."