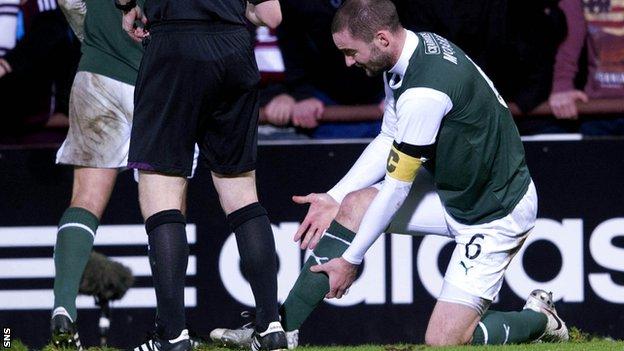 The full-blooded challenge came in the first half of Thursday's goalless Edinburgh derby and Stevenson escaped without a booking.

"It's a shocking tackle," said Fenlon. "He had a look first before he left the ground. We're disappointed with that.

"He has a bad gash, James. There could have been a bit of damage there, but he's not too bad."

Stevenson could be retrospectively punished by Scottish Football Association compliance officer Vincent Lunny for the tackle.

"There were a lot of frantic tackles going in early on and he didn't book players early, which didn't put him under pressure."

Overall, the Hibs boss was happy with his side's showing in a game where Hearts hit the bar in injury time through a John Sutton header.

"You don't enjoy things like this, there's so much at stake and so much intensity," said Fenlon.

"We showed a lot of character tonight and were under the cosh for long periods in fairness to Hearts.

"Without creating loads of chances, they put us under a lot of pressure.

"We looked a bit leggy after Saturday - it was a tough shift against Celtic.

"It's another clean sheet. We haven't conceded a goal against Celtic or Hearts, so it's a tremendous achievement from the players."

Hibs' Irish striker Eoin Doyle had a great opportunity to give his team the lead but blazed over after Paul Cairney's precise pass.

"On play, they had the bigger balance of the play, but we might have had the best chance of the game with Doyle in the second half," said the Hibs boss.

"He's got to look at lifting them over keepers, but he'll learn."

"It was a disgusting tackle," he said..

"It was a red-card tackle. James McPake is not the kind of guy to make a fuss over nothing, but straightaway he's told the ref it was a two-footed lunge.

"I think everyone saw it except the referee."