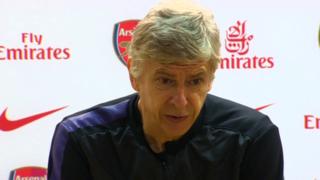 Walcott ready to be striker - Wenger

Arsenal manager Arsene Wenger says Theo Walcott is "ready" to play as a striker - the Gunners are currently in contract negotiations with the player.

Wenger says the club's priority is to sign the 23-year-old and only once current players' contracts are resolved will Arsenal think about brining in new signings during the January transfer window.

Walcott's contract expires in the summer and he is free to speak to other clubs but has so far remained coy about his intentions.