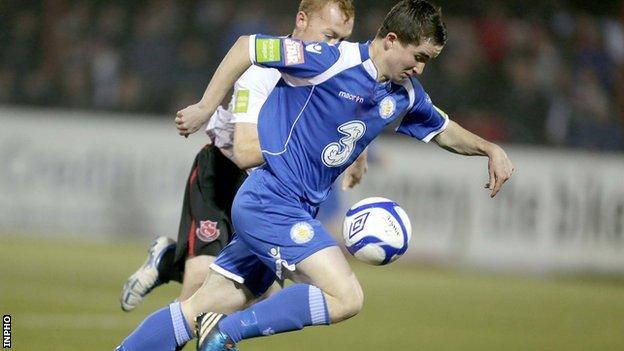 Maguire, who was born in Luton but grew up in Kilkenny, has joined on a two-and-a-half year contract.

The Republic of Ireland Under-19 international has scored 14 goals in 32 games for Waterford.

Waterford chairman John O'Sullivan told BBC Sport: "I'm a great fan of Lionel Messi at Barcelona. When I look at Seanie, he really reminds me of him."

He added: "Seanie has the same kind of balance, burst of speed and he's powerful on the ball.

"He has a great shot from any range and he's good in the air. He has everything going for him. He still has to build up a bit of muscle, but there's no doubt West Ham will help him do that.

"If Seanie keeps progressing the way he is, it won't be long before he's getting first-team football at West Ham. There is no question whatsoever he will be a star one day for the Republic of Ireland."

Maguire was out of contract and the Hammers have agreed a compensation package with the Irish side, who get crowds of about 1,800 for home matches.

He has attracted interest from several English clubs after starring for Waterford as they finished second in the Airtricity First Division, the second tier of Irish football, during their season which finished in November.

He was one of three nominees for the 2012 Professional Footballers' Association of Ireland Young Player of the Year award, won by midfielder Chris Forrester of St Patrick's Athletic.

It is expected Maguire will start in the Hammers development squad, which competes in the Under-21 Premier League.

"Here I am now at West Ham and it's a dream come true really," he said.

"People tend to say my best trait is my movement so hopefully I can show that here. I haven't been told yet which squad I will be in but I presume I'll be going into the reserves so I'll try to work my way up like I did at Waterford."

Warnock, who has two England caps, is back with Villa after spending three months on loan at Bolton.