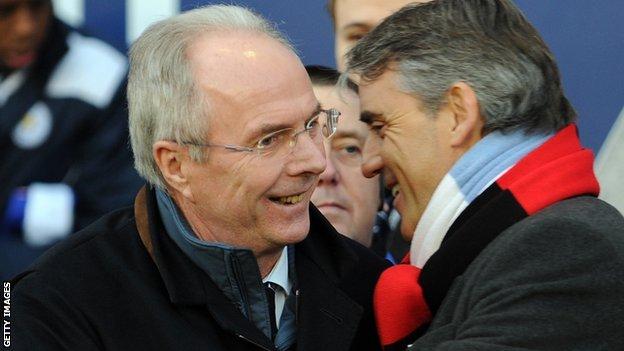 Ex-England boss Sven-Goran Eriksson says "bust-ups" like the one involving Manchester City's Mario Balotelli happen "at every club in the world".

The striker and City manager Roberto Mancini were photographed appearing to have an angry confrontation.

"At any football club in the world this sort of thing happens, it just never comes out into the press," said Eriksson, who managed City in 2007-08.

"The difference with City is that people can photograph training."

City's Carrington training ground is adjacent to a public right of way and although the club have erected screens in between, photographers are able to see over the top of them by climbing on stepladders.

"The difference with City is that photographers can stand and take photos all the time at Carrington and this still doesn't seem to have been sorted out," the Swede explained. "It was the same when I was there."

The 64-year-old, who has managed clubs in Sweden, Portugal, Italy and England, said he has witnessed numerous training ground bust-ups during his career.

"Several times I have had to send players home from training because they had this kind of incident," he said. "I said: 'go home, come back tomorrow'. It just never got into the papers.

"Sometimes a player makes a bad tackle and the other player responds, it's normal, this is a contact sport. The manager has to respond. He is responsible, so you have to deal with any problems.

"How you deal with it depends on the situation. Every experienced manager in the country has been in a situation like this."

Eriksson is a friend of Mancini, having managed the Italian at Sampdoria and Lazio, and added: "I have seen the pictures on the internet and Mancini looks furious.

"I don't know what happened, but Mancini is a very, very good man. Of course he is emotional, he is Latin, but I wouldn't say he has a particularly short temper. He just stands up for his team."