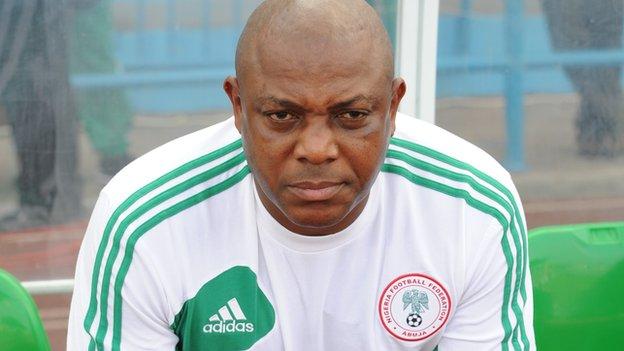 Nigeria coach Stephen Keshi has strongly criticised the role of some white coaches in African football just weeks before the Africa Cup of Nations.

Frenchman Herve Renard coached Zambia to the 2012 title but Keshi has concerns about some who work on the continent.

"The white guys are coming to Africa just for the money," he said.

"They are not doing anything that we cannot do. I am not racist but that's just the way it is."

However, Uganda's Scottish coach Bobby Williamson does not agree.

"When I first came here, the money I was being paid was just enough to pay the mortgage. It has improved because I have been relatively successful; at the regional African Cecafa tournaments and I've also get close to qualifying for the Africa Cup of Nations.

"We are all professionals, if he [Keshi] could get a better job in Europe and earn better money, then I'm sure he would be off like a shot.

"It's just like most African players who are playing in Britain: they're not just there for the love of football, they are there to make money - they are professionals."

Keshi, who won the Nations Cup as a player in 1994, was also critical of the attitude taken by some of the continent's governing bodies.

The former Togo coach feels that there is a substantial difference in the way that local and foreign coaches are treated by football associations across Africa.

"African coaches - when [federations] employ them, [the federations] want them to win the World Cup, the Africa Cup of Nations and every game," said a man who has steered Nigeria into this month's finals in South Africa.

"Meanwhile, if you give a white person the same job, you tell the white person they need one year to adapt, to know the country and the players - they are told 'don't worry, take your time'.

"That is unprofessional and is one thing that is killing African football."

But Williamson believes it is up to African coaches to improve their standards.

"It is not about being black or white, it is about having the qualifications," he added. "I've got them. My Uefa licence doesn't expire until until 2016 and I'll be doing what I need to in the meantime to keep it up.

"I'm not sure that many African coaches have that qualification and that is the biggest problem. They have Confederation of African Football qualifications but I don't think they match the level of the European qualifications."

Of the 16 coaches who will be leading out sides at the 2013 Africa Cup of Nations, nine hail from either Europe or South America while seven are from the Africa.

Foreign, mainly-European, coaches have long had an influence on African football.

A Hungarian coach - Pal Titkos - led Egypt to Nations Cup glory in only the second edition of the tournament in 1959.

In all, Africa's premier football event has been won by a local coach on 13 occasions, with foreign coaches triumphing 15 times.