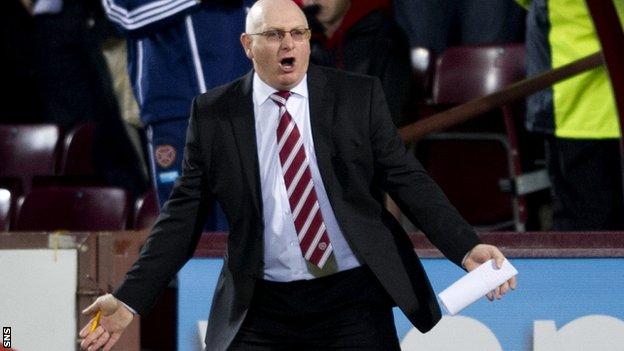 Referee Willie Collum did not deem the tackle worthy of a booking in the goal-less draw at Tynecastle.

But Hibs manager Pat Fenlon described it as shocking, while defender Ryan McGivern said it was "disgusting".

"It's a derby game and you want your players to be committed. It showed the spirit of the place," said McGlynn.

"We were very dominant and I think we deserved to win the football match."

However, Stevenson could be retrospectively punished by Scottish Football Association compliance officer Vincent Lunny for the tackle.

Hearts domination was arguably reflected in the corner count of their 12 to Hibs' one, but John Sutton's header off the bar in injury time was the closet they came to grabbing the winner.

"We got the ball in the box but just couldn't get the finishing touch," McGlynn told BBC Scotland.

"It was just a case of getting one of those ones to go in the back of the net.

"It's another game we've dominated and not got everything we've deserved from it."

"They've just beaten Celtic and thought they were league champions.

"That's two games and they've scored one flukey goal against us."

McGlynn had defender Andy Webster pull-out of Thursday's team due to flu, compounding what seems like the imminent loss of Ryan McGowan to Chinese side Shandong Luneng Taisha.

"But such was the attitude of the players tonight that Hibs are not going to come out of here with three points."