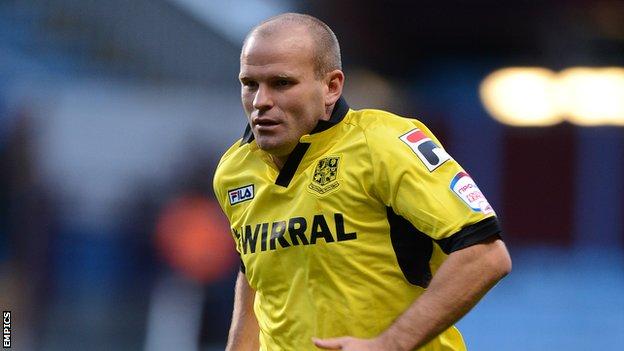 Andy Robinson hopes Saturday's FA Cup tie at Derby will give Tranmere a taste of the Championship - a level they aspire to be playing at next season.

The League One leaders face the Rams in a third-round tie at Pride Park.

"We've nothing to lose," Robinson told BBC Radio Merseyside. "We can show what we can do against a Championship club. That's where we want to be ultimately.

Unfancied for promotion at the start of the campaign, Ronnie Moore's side have surprised many with their continued presence at the top of the table.

Rovers went three points clear at the summit by registering a against Bury on New Year's Day - a game in which Robinson scored the only goal, having earlier seen a penalty saved.

The midfielder, 33, added: "It just shows the character of the team since a 5-0 drubbing at Swindon [on 21 December]. Wins will help. Everyone wants to see fantastic football, but you're not going to see that every week.

"I'm delighted that we've got the distraction [of the FA Cup].

"Over the Christmas period, with the tough games that we've had and the pitches we've had - I'm sure it will be a fantastic surface there and we can go there and enjoy it."