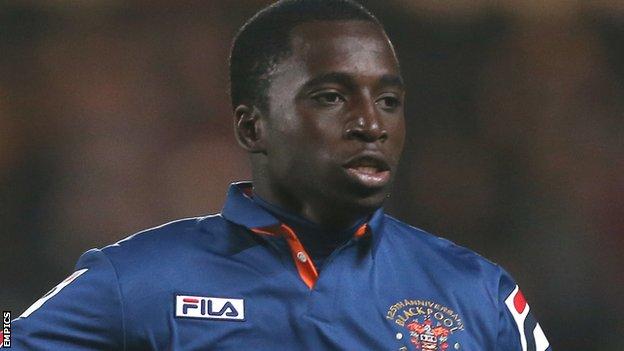 Wigan have recalled striker Nouha Dicko from his loan spell at Blackpool.

Dicko scored five times in 22 games during his second stint at Bloomfield Road, with the Seasiders.

The 20-year-old Frenchman was scheduled to stay with the Championship club for the entire 2012-13 campaign.

If we were able to bring in three or four new faces, I think it would give everyone a lift

Fellow striker Wes Thomas has also returned to his parent club, League One side Bournemouth, at the conclusion of his loan spell at Blackpool.

Meanwhile, Seasiders manager Michael Appleton wants to make three or four additions to his squad in January to halt his side's slight slump in form.

Soon after his appointment at the start of November, Appleton stated that he wanted to that he had inherited from previous boss Ian Holloway, and such as Matty Phillips and at the club.

Speaking after the which extended their winless run to four matches, he told BBC Radio Lancashire: "I'd like to keep them all [the players currently in his matchday squad] and add three or four new faces who are competing to be in the starting XI.

"There's no point bringing players in if they're only going to sit on the bench. They have to affect what's happening on the pitch.

"If we were able to bring in three or four new faces, I think it would give everyone a lift."