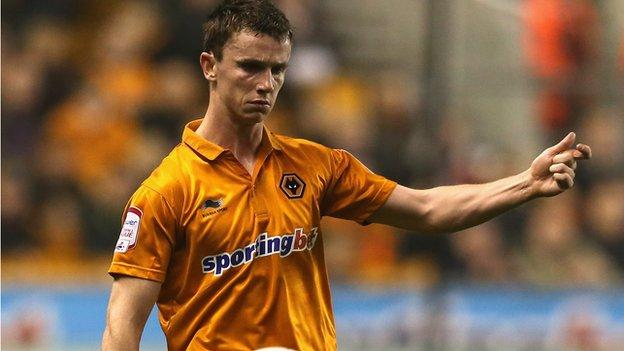 Kevin Foley admits that he is hungrier than ever to get a result when he heads back to Kenilworth Road with Wolverhampton Wanderers on Saturday afternoon.

The 28-year-old former Luton Town right-back thought it looked a tasty enough treat on the FA Cup menu when Wolves were paired with his old club when the third-round draw was made a month ago.

After all, his mum Kathleen still runs a cafe just round the corner from the ground - and the Luton-born Republic of Ireland international defender was looking forward to being pestered for tickets by friends and family.

But Wolves' bleak Christmas has suddenly attached a great deal of importance to Saturday's fixture. And Foley knows that there are now bigger fish to fry - chiefly the job of getting past the Luton minnows.

Probably my best-ever memory with Luton came in the FA Cup third round at Kenilworth Road when we played Liverpool in 2006. It was on television under the lights, set up for a classic and it was. We were leading 3-1 but eventually lost 5-3 and it was a magnificent game - I remember Alonso scored from the halfway line and Gerrard got a great goal too. It was the best game I was involved in with Luton even though we finished on the losing side

After three straight league defeats to send the dark clouds scurrying back over Wolves manager Stale Solbakken's head, the travelling contingent down the M1 to Bedfordshire know that an embarrassing Cup exit to a Blue Square Bet Premier side would seriously test the Molineux board's patience.

"It was a great draw for me when it was made," Foley told BBC Sport. "I was excited about the tie and going back to Luton.

"It is a special game for me but it would certainly have been nicer going there with some wins behind us and in a better league position.

"After our last three performances it has become far more significant and this is now a very big game for us.

"The pressure will be on us and off Luton. But we have to go down there, put in a performance and reach the next round."

Foley, now in his sixth season at Molineux after being signed by Mick McCarthy from Luton in August 2007, is not the only former Hatters player in the Wolves ranks, midfielder Dave Edwards having followed him to the Black Country in the next January window.

Edwards will miss Saturday's game, having been sidelined in December for two months with a bad hamstring tear.

But he, like Foley, will have warned his team-mates what to expect from an intimidating crowd at tightly-packed Kenilworth Road against a club who have average home gates of 6,000, will be close to their 10,000 capacity on Saturday and are non-league very much in name only.

"I'm sure it will be a sell-out with a great atmosphere," said Foley, who was first picked up by Luton at the age of just nine.

"We always had a fairly decent home record in my day and they are always tough conditions for an away side. The Luton fans get behind the team.

"But it is an experience a lot of us have been through before.

"A lot of the players in our squad have come up through the lower leagues and gone on from there to play in big stadiums, so we should all be ready for what to expect and the fact we will have to battle it out with a team trying to cause a shock."

It is Wolves' first visit to Luton since winning a five-goal Championship thriller there in March 2007, when Foley was on the losing side.

"I remember it was an exciting game at Kenilworth Road when Karl Henry got the winner and Wolves won 3-2," he recalls.

"That was a big win for Wolves, at the time when they were just picking up and starting their push for the play-offs.

"And, earlier in the season at Molineux, Jemal Johnson got the winner in a very tight game.

"That season we ended up getting relegated and Wolves missed out in the play-offs.

"I was then signed by Wolves and I've been delighted to go on and have some success here."

The other Kenilworth Road connection

The only members of the playing staff still at Luton from his time there are stand-in keeper Dean Brill and reserve team boss Alan Neilson. But he still has fond thoughts of his home-town club - and especially of his mum's cooking.

"She runs a café called Snack Attack not far from the ground," reveals Foley. "She used to supply the players with baguettes after training and I think she still supplies food for the police on matchdays.

"I think a few of the players still go in there, so I can imagine there has been a bit of banter going back and forth."

After suffering relegation in three successive seasons as the former owners' financial world collapsed around them, Luton have found it hard to get back into the Football League - and currently lie fifth in the league table, eight points off top spot, midway through their fourth successive tilt at promotion. A far cry from their great days of Syd Owen, Malcolm MacDonald, Eric Morecambe, David Pleat, not to mention their 1988 League Cup final win over Arsenal at Wembley.

"Being deducted points was always going to make it difficult," admits Foley. "And the Conference seems a really tough league to get out of.

"The play-offs is always something of a lottery. If there were two automatic promotion places I think they'd be well up by now. But hopefully they'll get back into the league as soon as possible."